Reported in the Manhole Cover - Damaged (rocking or noisy) category anonymously at 07:39, Friday 15 May 2020 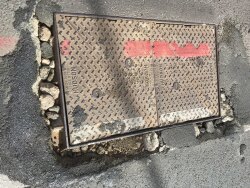 The concrete surrounding the manhole is crumbling with big pieces flying around whenever vehicles pass it making it a very hazardous situation. It could cause great harm even death to pedestrians or other road users. This is a SERIOUS and URGENT matter which was reported in February by a neighbour but no intervention as yet.