The traffic lights seem to be going to read frequently even when there’s no one waiting to cross and no traffic between that set and the other set round the corner either so think it must be faulty?

Reported via mobile in the General Fault category by Thomas Munro at 11:03, Mon 23 November 2020 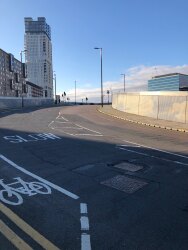 You will see the lights at the top of the hill here they seem to go to red frequently now even though there’s no obvious reason why they should as no one has pressed to cross the road and there was no traffic between this set and the other set at bottom of hill either and it never did this before anyway.