The traffic lights are insufficient not safe

Reported via mobile in the General Fault category anonymously at 15:08, Sat 25 September 2021 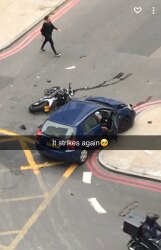 Vehicles are allowed to turn right into Jerald street. However the lights only control the traffic going up and down loampit vale

Those turning right have no lights to assist them and is simply down to driver decision.

The others were from March last year

After the March incidents there was another less fatal incident

I’m hardly ever home but even my neighbours speak of how frequently people are injured here. I reported my concerns to Lewisham council and was told highways England were responsible

However I tried to report my concerns online today and the automatic response said it wasn’t managed by them.

Or some safer alternative for Jerald street.

It is negligent to not do anything at all. In one of the pictures someone’s son was trapped under the bus and lost his life at this spot last year