Reported via desktop in the General Fault category anonymously at 09:53, Thu 4 November 2021 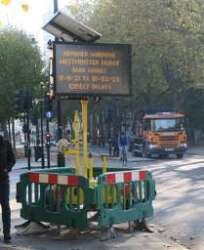 The Problem Poor Road Design - if TfL contractors cannot work how their own road and cycle system works, then what chance is there for we users?

The Solution Proper Road Safety Auditing - so that TfL learns from, and corrects, mistakes.

What has happened On Monday a TfL contractor stopped his vehicle in my street, got out, looked around and along St George's Road, SE1, and drove off. His job was to put a solar powered screen in place to advise of imminent road works. He put it on the pavement by the junction of St George's Road and Garden Row. See photo

What it demonstrates The design of CS6 is flawed and confusing. The contractor, along with drivers and more importantly cyclists, believes that St George's Road is a dual carriageway. Since its construction, along with the occasional vehicle, many northbound cyclists either stay on the road or use the pavement. Southbound cyclists use the pavement too. They look blank if you say anything. CS6 serves four schools between the Elephant and St George's Circus, but few children cycle. Why would they if drivers like the contractor don't know its a cycle lane and such dangers go unaddressed?

What pedestrians think They are exasperated as cyclists weave amongst them as CS6 should have made things better but poor design has made things worse.

Small improvements wouldn't cost a fortune. Some larger ones would but all would be more than repaid by it being better and safer for cyclists, kinder to pedestrians.

As to the sign Move it. If the warning of road works isn't read by those affected, local pollution will be even higher. The dire design at St George's Circus has hugely increased standing traffic in Westminster Bridge Road so can I have the faintest of hopes that the sign is for roadworks to remove the diabolical bus gate that blights the lives of residents and pedestrians, bus drivers and cyclists alike?