Cycle Lane Closed so that road signs can be displayed

Reported via desktop in the Roadworks category anonymously at 13:30, Thu 23 June 2022 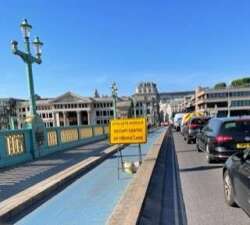 Why is SAFE cyclepath closed. It is being used purely for motor vehicle signage. Surely this could have been planned better and the SAFE cycle lane kept open? The traffic merging feels very dangerous, surely the contractor can handle this better. How long are these works scheduled for - they are dangerous