Reported via mobile in the Abandoned Santander Cycle category anonymously at 18:38, Thursday 23 June 2022 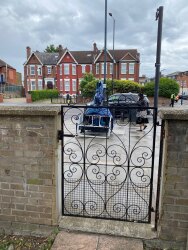