Reported via mobile in the Pavement Overcrowding category anonymously at 07:10, Saturday 6 August 2022 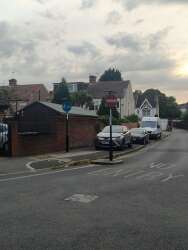 I can see this has been reported several times and yet still nothing has been done about it. The cars are blocking a cycle path on a one way street - forcing cyclists to cycle in the road against oncoming traffic. It is a serious accident waiting to happen!